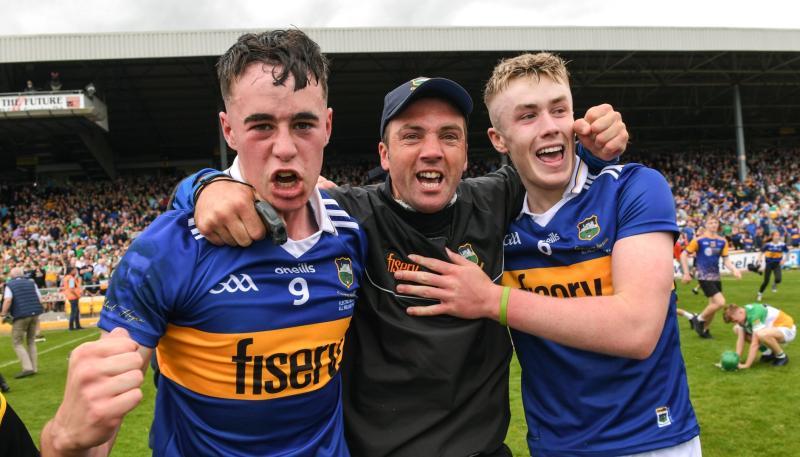 A sensational finish to this afternoon's Electric Ireland All-Ireland minor hurling championship final at UPMC Nowlan Park saw Tipperary collect their 21st crown at the grade and a first since 2016.
Offaly will claim that it was daylight robbery, when they seemed poised to win their fourth All-Ireland minor title and a first since way back in 1989, only for a last-gasp Tipperary goal to deny them their hour of glory.

However, not for the first time this year, this Tipp team snatched victory from the jaws of defeat, just when all seemed lost. They had pulled it out of the fire in the Munster final against Clare and the All-Ireland semi-final against Galway, and once more they produced something exceptional at the death to retrieve what looked like another lost cause.

Offaly shaped as the likely winners for much of a game played in front of a bumper attendance of 20, 214. Six points ahead at the interval, The Faithful County team looked to have done enough throughout the second half to secure the win and coming down the home straight they were still well placed to wrap up that historic victory.

But they hadn't reckoned without the sheer resolve of this Tipperary outfit and their stubborn refusal to accept defeat.

Two incidents that occurred within the space of a few minutes in the closing ten minutes suggested that an Offaly win was a certainty. Cathal Robinson was struck by a Tipp hurley when he had only Tipp goalie Eoin Horgan to beat, and after a lengthy delay Damien Corbett received a red card.

When Adam Screeney tapped over the resulting free, Offaly were six clear with as many minutes to play against 14-man Tipperary. Surely, nothing could stop Offaly from getting their hands on the cup and basking in their day in the sun.

However, this Tipp team is nothing if not determined. Points from Jack O'Callaghan, Sam O'Farrell and Paddy McCormack, following a great catch, edged them closer as the minutes ticked away.

As the final entered four minutes of additional time, Offaly restored a four-point lead through another Screeney free after Leigh Kavanagh had been unceremoniously hauled to the ground by Sam O'Farrell, who was given a yellow card for his troubles.

Yet, in the last ten minutes it was noticeable that the Tipp players were lasting the pace better. At least three Offaly players crumpled to the ground and were treated for cramp, while Tipperary kept driving forward.

Darragh McCarthy popped a free over the bar and when Aaron O'Halloran added another score from play there were only two points between them.
It looked like the goal they desperately needed to ignite their challenge would elude Tipp, but how wrong we were.

Offaly were nearly across the line but then Sam Rowan was pulled down as he advanced towards the danger zone. What followed raised Tipperary's hearts but sank Offaly's and will never be forgotten by anyone present. Paddy Phelan lobbed the free in and around the square and Paddy McCormack proved the hero of the hour when he rose high and among a forest of hurleys and flashed a shot to the net. It was incredible, quite incredible.

It was the seismic shift in terms of dominance in a full-blooded encounter. Offaly got the ball quickly back into play but the final whistle sounded within seconds, as a stunned attendance tried to make sense of it all, while Tipperary celebrated an unbelievable victory.