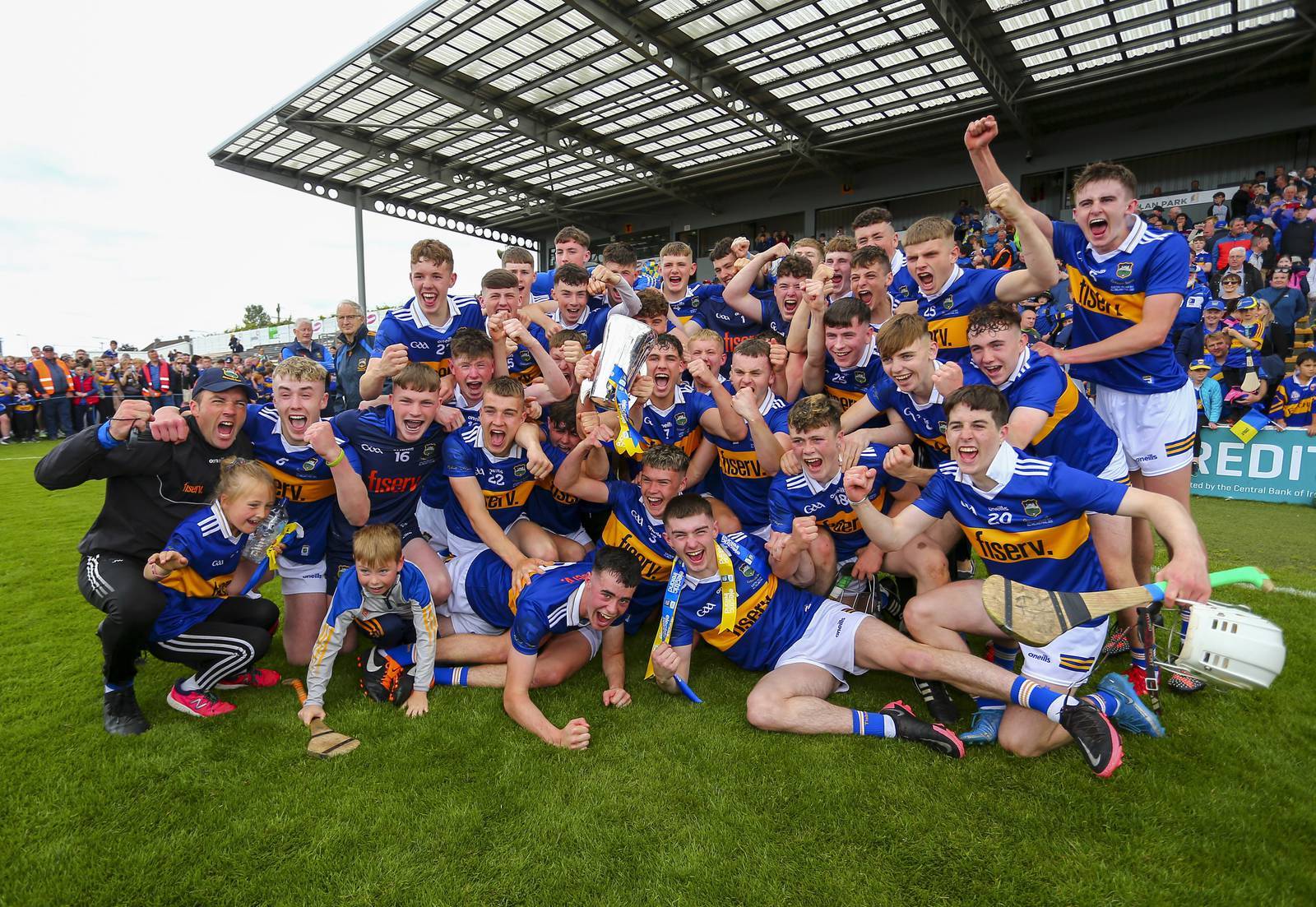 We say somehow, though, of course, it makes perfect sense that a group of players with an indefatigable spirit and never say die attitude should ultimately come out on top.

But it’s been a remarkable few months in the lives of these 16- and 17-year-olds, who stole the silverware at Nowlan Park with a fitting late burst, Paddy McCormack’s 65th-minute match-winning goal capping the comeback to beat all comebacks.

With just three minutes of normal-time remaining, Tipp trailed by six points, were down to 14 players following the 54th-minute sending off of corner forward Damien Corbett and looked destined for defeat having been largely outplayed in most sectors.

From that position of near despair, James Woodlock’s side summoned the courage to outscore Offaly by 1-5 to 0-1 before full-time.

Corbett’s dismissal – he was shown a straight red for tossing his hurley at Offaly’s Cathal Robinson during a goalscoring opportunity which ended in a converted free – appeared to play into Tipp’s hands.

Suddenly the structure and order of Offaly’s play was pulled asunder and Tipp capitalised, moving the physically powerful McCormack to the full-forward position where he wreaked havoc and pinched 1-1.

Offaly manager Leo O’Connor wondered afterwards should a penalty have been awarded for the hurley throw and also queried why a free out in the dying moments wasn’t awarded for an apparent foul by Tipperary’s Darragh McCarthy on Niall Furlong.

Moments later, Tipp, trailing by two points, were awarded a free-in for a foul by Brecon Kavanagh on Tipp sub Sam Rowan. And when Paddy Phelan opted to float the ball into the danger area, McCormack took full advantage with a majestic leap through the air and volleyed finish to the net.

From nowhere, and having trailed since the 27th minute, Tipp now led by one and won the subsequent puck-out before full-time was blown by referee Shane Hynes.

“We have been tested all year,” said Tipp manager Woodlock. “We had to go away to Fraher Field, huge game, we won the Munster final after extra-time and penalties, then we clawed it back against Galway in the All-Ireland semi-final. So that aspect of our game is phenomenal, just huge character, huge heart and desire shown by this group and that’s been the same all year.”

McCormack was a dubious man-of-the-match selection given the heroics of Offaly players in the previous 65 minutes or so, though he has had some season. It was the Borris-Ileigh attacker who sent the Munster final to penalties with a late free conversion, and he scored one of the penalties too.

Tipp’s 21st title at the grade, their first since 2016, draws them level in the overall roll of honour with Kilkenny. It’s also a rare double given that Tipp defeated Offaly in the Tony Forristal under-14 tournament final three years ago.

The Offaly players will take some time to bounce back from this one. They put the foot down late in the first half, reeling off 1-4 without reply to lead by 1-10 to 0-7 at half-time, and remained in pole position for the majority of the second half.

Full back James Mahon did a terrific man-marking job on in-form Tipp full forward Tom Delaney while goalscorer Leigh Kavanagh converted beautifully after being set free down the right by the excellent Adam Screeney, who struck 0-6.

Liam Hoare was masterful in goals for Offaly, while Caelum Larkin cleared a ton of ball, all of which left the Faithful County looking good to secure a first title since 1989.

They couldn’t hold on, though, and will have nightmares about the final few minutes of this epic.