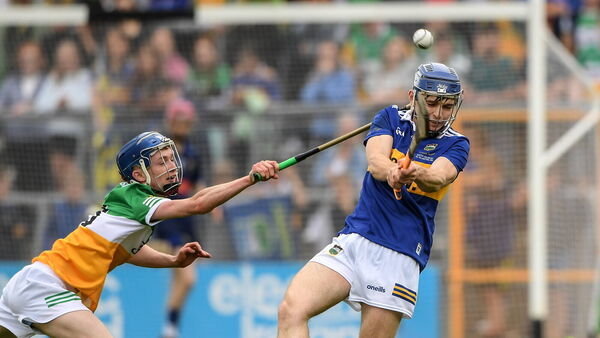 A Paddy McCormack goal in the fifth minute of second half injury-time broke Offaly hearts and secured Tipperary the unlikeliest of All-Ireland minor final wins.

14-man Tipperary trailed by four points with two of the allotted four minutes of injury-time played and it seemed nailed on that Offaly would clasp their hands on the Irish Press Cup for the first time in 33 years.

But in the most dramatic of finishes - elating for Tipp, devastating for Offaly - the Premier youngsters fired over back-to-back points through sub Darragh McCarthy and full-back Aaron O’Halloran to reduce the deficit to two with time almost elapsed.

In an incredible final act, Tipperary won a free 30 metres from goal that was lobbed into the danger area by Paddy Phelan and whipped in the air to the net by McCormack.

Offaly did have time to get their restart away, but once possession was lost out the field, referee Shane Hynes brought the curtain down on a remarkable finish.

Having lost corner-forward Damien Corbett to a straight red card on 53 minutes when he threw his hurley at Cathal Robinson, Tipperary, despite operating with a man less, outscored their neighbours by 1-5 to 0-2 in the final 12 minutes. Moreover, Offaly did not score from play in those final 12 minutes.

A burst of 1-4 without reply from the 26th minute to the interval whistle had handed Offaly a six-point 1-10 to 0-7 half time lead. And while it was a substantial lead in the context of a game where no more than two points had separated the sides prior to Offaly’s five unanswered scores, the Faithful youngsters could have doubled their advantage out to 12 during first half stoppages.

It was an action-squeezed two minutes of injury-time where Offaly had three green flag opportunities, but only took one.

Half-forward Leigh Kavanagh, put through by the lively Adam Screeney, had the heaving Offaly crowd on their feet with the game’s opening goal just as the clock ticked past the half hour mark.

In the ensuing play, Offaly almost fashioned a second goal, Niall Furlong hooked by Tipperary’s Cathal English as he went to pull the trigger. Another Tipperary intervention was crucial to prevent a Screeney goal in the last play of the half, the diminutive corner-forward twice blocked.

Screeney, after a difficult start to the game when he missed two frees, settled and had three white flags to his name come the interval. Fellow corner-forward Daniel Hand also finished the half with a tally of 0-3.

Leo O’Connor’s forward unit were guilty of eight first half wides, whereas Tipperary, working off less possession, were far more economical down the other end of Nowlan Park.

Their two-boy inside line of Damien Corbett and Tom Delaney caused plenty of bother for the Offaly defence, with midfielder Adam Daly also making an impression with a brace of points.

James Woodlock’s charges had hit three of the game’s four points prior to the Offaly burst to lead by 0-7 to 0-6, but theirs was a sizable second half task after Offaly reached a new level in the final six minute of the half.

It was a task that grew larger again when Corbett was sent off on 53 minutes, but they somehow found a way.

This 21st All-Ireland minor win puts Tipperary joint-top of the roll of honour alongside Kilkenny. For Offaly, the cruelest of ends to a journey that captured the imagination of the hurling community both inside and outside the Faithful County.