Anthony Daly: Can anyone say with confidence that Cork will beat Tipp? 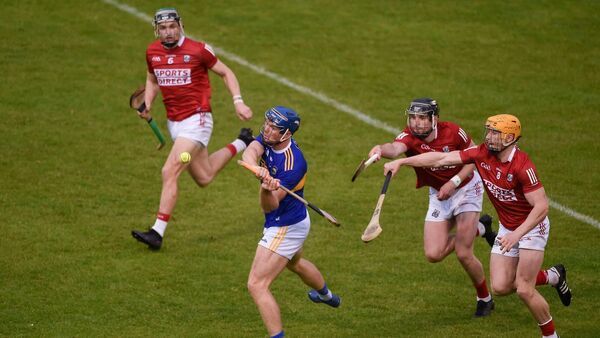 Cork looked to have rediscovered some of the mojo from last year. On the other hand, where are Waterford? In that context, nobody really has any clue where Cork are at

Every year now, in hurling anyway, the knockout element brings out the animal in everyone, where every team is clawing and battling to stay alive, to keep their season going, to keep that ambition burning. Losses are inevitable along the way but when you’re in the last chance saloon, everyone is seeking to stoke the embers back into a blaze.

Most of that pressure comes later in the season, especially from the All-Ireland quarter-final onwards, but it’s a whole different level of pressure when that heat arrives in May, and before the summer has even warmed up.

The split season has changed everything but going out of the championship in mid-May is a throwback to the early-to-mid 1990s. In my last five years on the Clare panel between 1996-2001, we went out of the championship in three of those seasons after just one game. But all three were in June. And back then, that was the reality we all lived in, before the full-blown qualifier system first arrived in 2002.

It was cruel stuff. The modern players aren’t subjected to that torture but – but – you can’t say that the pressure is any less now than it was back then. In lots of ways, especially in Munster, every game still nearly feels like knockout. Clare are already in the Munster final but that first game against Tipp in Thurles at the end of last month felt like everything was on the line.

Its absolute knockout for Cork again tomorrow but it was the same last week against Waterford. Whatever slim chance Tipp had of progression appeared to perish after they lost to Limerick but – after losing three games – that tiny chance is still alive.

Tipp need a lot – an awful lot – to go their way; as well as having to beat Cork by seven points, they need Waterford to lose to Clare by eight. That’s hardly going to happen but, in hurling, anything is possible.

Tipp have to forget about all that stuff, especially the permutations and what they need to happen, and just play the match for what it is – a game that just has to be won.

It’s much more straight-forward for Cork but, on the otherhand, if they blow this now – from this position – there will be hell to pay. All the positivity after the Waterford game will be washed away in a deluge of negativity and recrimination.

This is a golden opportunity but gold can easily turn into rust in this game in the blink of an eye. Cork will be just focussing on getting a performance but you can’t avoid the pressure either. They admirably hurled well under huge strain last weekend but they could nearly throw off the shackles when they were so heavily written off. They don’t have that luxury here.

You wouldn’t give much for Cork’s hopes of winning an All-Ireland but the road still opens up for them if they bag the two points tomorrow. Munster looks stronger than Leinster so a preliminary quarter-final win against the Joe McDonagh champions would set up a quarter-final against the defeated Leinster finalists, which is not a challenge Cork would fear. At the same time, could you say with any real conviction that Cork will beat Tipp? No.

Cork still have a lot of experience. They were in an All-Ireland final last year. They looked to have rediscovered some of the mojo they showed en route to that decider. On the other hand, where are Waterford? How good are they? In that context, nobody really has any clue where Cork are at.

When Waterford led by 0-6 to 0-2 in the first quarter, any other top team would have drove on and pummelled Cork into the ground, like Clare did against them in the first half. If Limerick were in that position, the match would have been over by half-time, but we’ve all come to realise now that Limerick are in a different category, with Liam Cahill’s side nowhere near as close to the All-Ireland champions as we suspected they might be.

Cork showed admirable resilience to drag themselves back into the game, especially when it looked like being another horror-show early on. But was that more down to the paucity of Waterford that Cork’s resistance? Hard to know.

You’d be delighted with Cork’s workrate, application and commitment, but they don’t just have to repeat all of that now – Cork have to do it even better again.

Cork have a more settled look to their team now. I said it here earlier in the year that Cork would be better served with Patrick Horgan as an impact sub and that’s what I expect to happen, even if Horgan is named to start.

Tim O’Mahony gives Cork more of a focal point up front but that move is still in the incubation stage of the experiment You can’t judge it on the back of 35 minutes against a poor Waterford performance. I felt anyway that such a move needed to happen back in the league, even for just one or two games.

Cork will have to trust O’Mahony, which is something that still might be an issue around his move from defence to attack. They were obviously giving Hoggie the benefit of the doubt seven days ago, especially when he was going to break the all-time scoring record. But it was still unusual that they didn’t start O’Mahony, and that the soundings around their reasons for not doing so were injury related. He certainly didn’t look to be injured when he came on.

O’Mahony was centrally involved in Alan Connolly’s second goal and, while both of them – along with Shane Kingston – present Cork with more scope to get goals, Tipp can’t just focus on stopping that threat. Because their focus has to be absolutely goal-laden at the other end.

I fully appreciate that they can’t get carried away with permutations but Tipp still have to gamble and go for everything. Even half-chances have to be considered full-blown chances, which is something that’s very difficult to do in the heat of a championship match, especially one with so much on the line. Yet given Cork’s oscillating state, a couple of early goals could cause untold damage.

I expect Cork to win but there are still too many doubts around them to make that prediction with any real degree of conviction. I wouldn’t rule out a draw, which would torpedo Cork if Waterford win.

Can they in Ennis? I expect a backlash but I couldn’t say for sure either that the lash will be enough to whip Clare. Waterford look stale, tired almost. They didn’t handle the pressure at all last weekend so there are no guarantees they’ll be able to manage an even more precarious position now in a ground where they have historically struggled.

Much of this could depend on the team Clare send out. If I was Brian Lohan, I certainly would be resting as many of my key players as possible. But I’m not Lohan – nobody is – and you wouldn’t know what way he is thinking. His approach might be – let’s just keep our unbeaten run going and just bury these guys.

Unlike other squads, even Waterford’s, Clare don’t have that kind of a panel where they can be totally experimental. Clare do have bodies to come back, some of whom like David Reidy and Shane Meehan are already back, but you can’t just throw lads in who have had no championship experience because you could risk shredding their confidence for down the line.

Clare had lads on the panel of 26 last week who are good club players but five of them have minimal league experience, with a couple of them having none at all. Lohan was always as brave as a lion but he’ll hardly be that brazen where he’ll just throw lads straight into the fire and see if they ignite or get toasted.

Everybody expected this to be a Munster semi-final but, now that it isn’t, there has been no real focus around the county on this game. All anybody is really talking about is the Munster final and having another right cut at Limerick. Will that get through to the players? Possibly.

If Waterford have anything in them they’ll have to be coming up to Ennis with all guns blazing and get the job done. Even if they win and don’t qualify, Waterford need to perform for a host of reasons, especially for next year. A statement performance will show that the squad are fully behind Cahill, now and in the future. Another blowout would raise questions as to whether that really is the case. You’d be surprised how quickly players can turn on a manager.

Cahill will be hoping to see that faith because he is in trouble if he doesn’t get it. For the time being anyway, Waterford should get the win. And then Cahill will be praying to a different faith - that his own crowd can do him a favour in Thurles.