Tipp and Dunne weigh up options as touchline ban is upheld 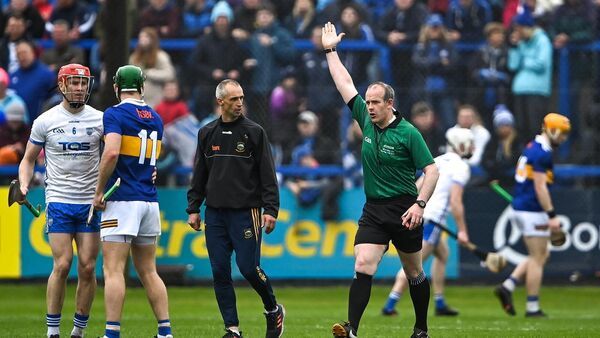 Tipperary coach and selector Tommy Dunne is considering his options after his three-month ban was upheld by the Central Hearings Committee.

The 2001 All-Ireland winning captain and hurler of the year was sent off by referee Johnny Murphy at half-time of the county’s provincial opener against Waterford last month following a verbal exchange between the pair.

Dunne was on the sideline for the following week’s match with Clare but was in the stand for last Sunday’s Munster SHC Round 3 defeat to Limerick in TUS Gaelic Grounds ahead of the hearing.

He has the option of bringing the case to the Central Appeals Committee in the hope he might either have his penalty reduced or quashed so that he may be able to assist Colm Bonnar in Sunday week’s final round game against Cork in Thurles.

Meanwhile, five Down players have left the panel ahead of the Tailteann Cup. Former AFL footballer Caolan Mooney is reported to become the latest to have stepped away after Ryan McEvoy, Gerard Collins, Charlie Smyth and Corey Quinn.

Down should learn their first Tailteann Cup opponents when the draw is made on Monday, the first round and quarter-finals being split on a north-south geographical basis.

Speaking ahead of her receiving the Gaelic Writers’ ladies football personality of the year award for 2021, supported by Wilson Hartnell, Wall believes the teams will face off again after recent league and Leinster games in Navan and Parnell Park.

“I don’t think it will be the last time we have played Dublin,” he said of last weekend’s one-point provincial round victory over Dublin. “I think we will definitely be meeting them again. Once, if not more than that.

“Every time we play them there is only a kick of a ball between us, so for both of us and I think spectators as well, they are the type of games you want to be involved in. You want to be constantly learning and pushing yourselves so yeah, it’s great.

“We are learning every game we play. We hadn’t played them competitively since 2016, up until the All-Ireland final last year. Now we’ve played them three times in the space of a few months, it's great for both teams, really.” The Dunboyne woman is thrilled the team’s success has sparked huge interest in the county. “I suppose it’s definitely a bit bizarre,” she remarked of the attention she is receiving. “I wouldn’t say I’m used to it now at all. It still kind of comes as a bit of a shock.

“Again, I think it comes back to the hype of those games (last year). Even after the game there on Saturday at Parnell Park people were queueing up to get pictures of everyone on the team.

“People are kind of idolising the entire team. It’s great, especially for young girls to have those kind of role models and it’s so close to home for a lot of them in Meath as well.”