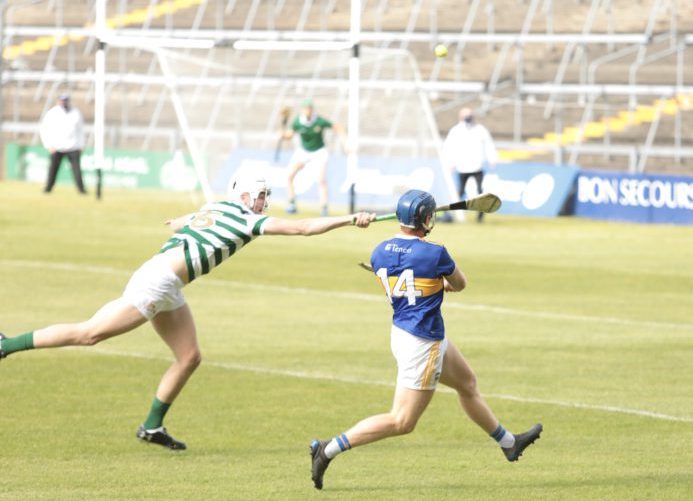 So after 13 consecutive victories and in just their first game of 2021, Limerick’s 100% run has been arrested.

Sure, you can read it like that or consider their unbeaten record continues and they have extended Tipperary’s wait for a win over them at LIT Gaelic Grounds that goes back to 2015. Six of one, half a dozen of the other, which was how this game finished up on Saturday evening thanks to David Reidy’s additional time free.

On opening night, John Kiely wasn’t interpreting depriving Tipperary of only a second win in seven meetings as anything more than a good return for his team’s endeavours having been five behind in the 54th minute.

“We’re all the bottom of the mountain. And we all have to climb the same mountain over the next few weeks.”

Liam Sheedy was grateful to take something away, mind. The Ennis Road venue hasn’t been a happy hunting ground for his group, fortunate to lose the 2019 Munster final to Limerick by 12 points and their last competitive outing coming here in the All-Ireland quarter-final defeat to Galway.

To have lost would have been a squandering.

“For us to get a point, it was an important point in a lot of ways because to come in and not get anything out of it after the effort they put in... I thought our work-rate throughout the field was very good. I thought some of the blocks we got in on top-class players was a very pleasing aspect of the game.

We worked hard, we hung in and we failed to close it out but we didn’t get turned over.

“When we went 19-14 up if we got another point or two we probably could have pushed on and closed out the game but full credit to Limerick they brought on some top-class players, they probably got a grip on things around the middle of the park. We might have ran out of a little bit of juice.”

Having been away from it for so long, this game was bound to throw up some unusual features. That Tipperary failed to score from play in the second half and relied completely on Jason Forde for their eight scores in that period was bizarre.

“We struggled to get on quality ball and find space and when we did we didn’t really finish it out so that was a disappointing aspect of our game,” reviewed Sheedy.

“Sometimes the final pass was letting us down. But let’s not forget you can play all the internal matches you like, nothing prepares you for a game like today.”

The new advantage rule threatened to make a hash of the game and Kiely smiled wryly when the high free count was brought up afterwards.

“I don’t know when Colm (Lyons) last refereed a game so they’ve got to get a chance over the next couple of weeks to get some game-time in and get their decision-making up to scratch as well so they’re in the same boat as ourselves.

Sheedy summed up the match afterwards as a game of four quarters, the first and final periods won by Limerick and those between them claimed by his team. The teams were level on 10 occasions including half-time when the scoreboard read 0-12 apiece.

Only Limerick’s goal was threatened and just the once, Jake Morris’ 28th shot hit straight at Nickie Quaid. Willie Connors looked to be on his way to testing Quaid in the 48th minute but was fouled before he could put ash to leather.

After a shaky opening 18 minutes when Seamus Flanagan threatened to run riot, Sheedy took satisfaction from his backs’ collective display.

“Structurally, we were very sound and that is very pleasing. I thought we were probably stretched early on but once we got a handle on that I thought the lads defended very well.

“It’s great to see Brian McGrath and Bryan O’Meara putting their hand up. They’re a year older, they’re a year stronger. Cairbre (Ó Cairealláin) has done a really good job in terms of their physical preparation over the last number of weeks. That’s a very pleasing aspect of the game.

“We feel we are assembling a good panel, a good strong bunch and we may see a few more guys next weekend.”

For Kiely, the lack of panic was a major takeaway. Led by Peter Casey, the cavalry summoned from the bench for the closing stages delivered.

“Listen, we've worked really hard over the last three weeks and at times we were possibly a little bit leggy out there. The attitude really was the big question more than anything, to be honest with you. I think they passed that test, particularly with the final quarter.”

David Reidy’s sixth free of the game, which turned out to be the last. It squared the match for a 10th occasion.

The lack of goal opportunities. Okay, this was the first of what each team hope will be a 15-week odyssey but Limerick’s meanness goes well beyond this game. Jake Morris’ first-half shot at Nickie Quaid was the only chance of a green flag.

Any day there is hurling is a good one. Saturday brought the first three competitive games in 137 days.

Colm Lyons is only the messenger so don’t be shooting him. The change to the advantage rule, put forward by the playing rules committee, was backed by Congress in February.

Bryan O’Meara had to make way by the end but Liam Sheedy reported the Holycross-Ballycahill man’s knock was a slight one.

Tipperary were funnelling the ball down the wings and in many ways made a bystander of Kyle Hayes although Barry Nash was on a lot of ball. Resetting for the second quarter, Tipperary looked more composed and marking changes helped.

A day for the marksmen as Jason Forde and David Reidy struck over 18 placed balls between them. Forde’s 12 points from such means was a stand-out statistic. In open play, Dan McCormack and Seamus Flanagan performed well.

MAN IN THE MIDDLE:

Thirty-two frees were blown by Lyons and the new advantage rule played a major part in such a high number. What’s more, what with this being the league and the opening weekend the whistle was going to be blown more.

More glamour clashes for these teams with Cork travelling to Thurles next Saturday evening and Limerick heading to face Galway in Salthill the following afternoon.