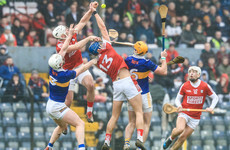 CORK CAME WITH a late charge to overturn an eight-point deficit and win their first Munster Hurling League title since 2017 with late goals from Brian Hayes and Jack O’Connor.

Seán O’Donoghue lifted his first trophy as new Cork captain and Pat Ryan enjoyed his first title as manager, as well as getting game-time into the legs of more than 30 panellists ahead of the National League.

Liam Cahill was boosted by the return of John McGrath from an Achilles tendon rupture he suffered last April. John’s brother Brian was awarded man of the match, and they led by 1-16 to 1-8 after 52 minutes.

But Cork hit 1-4 without reply, the first three scores from subs; a Conor Lehane point followed by 1-1 from Jack O’Connor, the goal after a move involving Shane Barrett and Lehane.

After Brian Roche levelled, Pauric Campion won a free that could’ve edged Tipp back ahead. However, his reaction after the whistle led Éamonn Stapleton to throw the ball in, and from that, Rob Downey won a free for Horgan to put Cork ahead for the first time in 45 minutes.

Forde levelled once more but Horgan hit the winner to the joy of most of the 4,727 fans at Páirc Uí Rinn.

O’Connor wasn’t even due to line out on Sunday. He came into the panel for Mark Keane, who was named at number six in the match programme; his decision to return to Australia, signing for Adelaide Crows, not communicated to management until the printers were already at work.

It was error-ridden winter hurling from the off, although the intensity brought by both defences forced many of those mistakes, while there were six missed frees from the usually faultless Forde (four) and Horgan (two).

The Michael Breen at full-back experiment suffered its first major adversity in the fifth minute, caught out by the clever body shape of Declan Dalton under the dropping ball. Dalton’s initial shot was saved by Rhys Shelly but Patrick Horgan tidied the rebound to the net.

Breen was then called for overcarrying on the subsequent short puck-out. Horgan’s free added to by two huge hits from Patrick Collins either side of his own 45m line. 1-3 to 0-1.

Cian O’Dwyer’s neat interplay set up points for Jason Forde, who drew oohs from the crowd when flashing his shot just over the crossbar, and Séamus Kennedy.

When Robbie O’Flynn stylishly pointed in the 22th minute, Cork led by 1-6 to 0-5 but they wouldn’t score again for the 16 minutes into half-time.

Brian McGrath was impressing in the air. He had scored the first point of the match and he caught two puck-outs which were worked upfield for a return of 1-1.

The goal came in the 25th minute, McGrath finding Seán Ryan, who exchanged a one-two with Conor Stakelum and rifled low to the net.

Tipp finished the half with a 1-4 scoring streak, three Forde frees added to by a Conor Bowe point, again whistling over the bar when taking aim for the net. 1-9 to 1-6 at half-time.

Cork’s scoring drought extended into the 46th minute as Tipperary took them for 1-7 in a row. Forde lasered over the first three points of the half before Seán Twomey found a response.

Breen had steadied up at full-back and his block on Colin Walsh prevented a potential goal, although the ref called play back for an advantage, with Horgan pointing.

Tipp rattled over the next four points, two from Forde and one each for Stakelum and O’Dwyer, and they led by eight.

It wasn’t enough as Cork carry the momentum from this comeback into the League campaign.