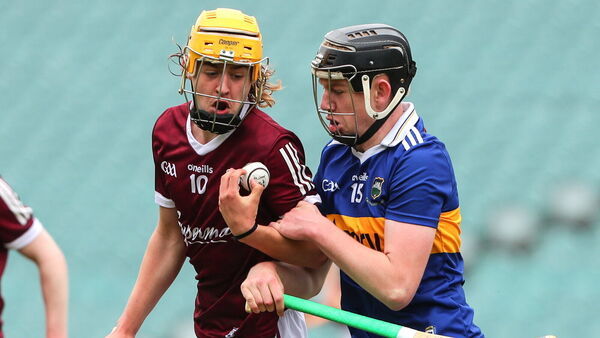 The Premier County returned to the scene of their epic Munster final victory over Clare, which was won after extra-time and penalties, this time it was their much-improved second-half showing that got them over the line

What a brilliant Electric Ireland All-Ireland MHC semi-final in the TUS Gaelic Grounds today with both sides giving their all, and after a hectic 60 minutes plus, it is James Woodlock’s Tipperary who progress to the final against Offaly on Saturday week.

Tipperary trailed by a point at half-time, 2-11 to 1-13 but went six points up in the second-half only to be overtaken at the death. They then hit 1-2 without reply in stoppage time - the goal coming from substitute Senan Butler in the 65th minute (just on the field) after he was set up by Tom Delaney.

Man-of-the match Delaney was just one of many heroes for the winners who enjoyed a greater array of scorers. Whilst, we should also spare a thought for Aaron Niland who nabbed 2-11 for Galway.

In a swirling wind, this intriguing contest ignited from the start with Galway racing into an early three points to one lead, the pick of which came from Niland. However, by the eighth minute, the sides were locked 0-4 apiece with the scores - all from play - coming thick and fast.

Galway’s equalising point which came from captain Rory Burke was brilliantly tipped over the bar by Tipperary goalkeeper Eoin Horgan.

Galway roared back through skipper Burke and Niland.

After a hectic opening quarter, the teams equally shared 16 points.

Twice Galway custodian Donagh Fahy was called upon to pull off sublime saves.

But Galway availed of two goal opportunities within as many minutes. First Niland hit the net in the 20th minute and this was followed by a Conor Dolphin strike.

Tipperary wouldn’t be outdone and replied through an Adam Daly goal in the 25th minute after Fahy, once more, made a fantastic double-save but couldn’t deny midfielder Daly, 2-9 to 1-12.

Niland and Ciarán Foley exchanged points before a Niland free left Galway 2-11 to 1-13 to the good at the change of ends.

Like the first half, the second-half started lively. This time it was Tipperary who led the way, ahead 1-19 to 2-14 by the 40th minute with excellent points in particular from Cathal English, Paddy McCormack and Delaney who was in sparkling form.

Galway rallied on the home stretch with Niland levelling with Galway’s third goal in the 58th minute. Rory Burke handed them the lead, 3-20 to 2-22.

A point from Adam Daly gained parity, followed by another from Joe Egan for a slender advantage. Butler’s goal, then the icing on the cake.

Tipperary will go in search of their first All-Ireland title since 2016.