A dark day for Tipperary hurling, as Cork reign supreme in Thurles 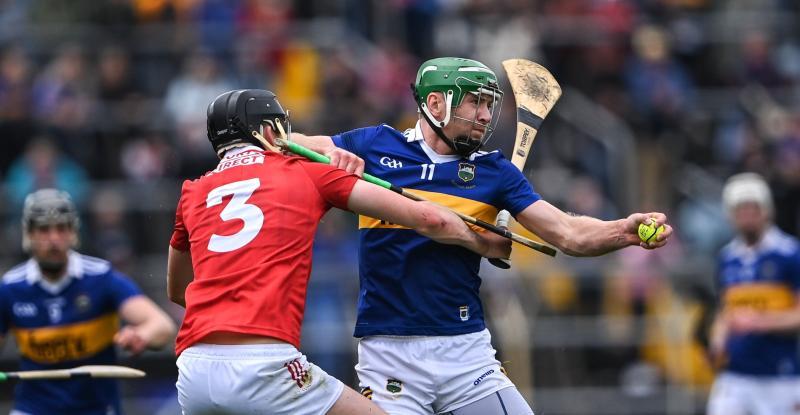 The hurling championship has already witnessed some great games this season. This wasn't one of them.

As soon as Cork scored their second goal in the 15th minute, the soaring victory that Tipperary needed to give themselves a fighting chance of reaching the All-Ireland quarter-final never looked possible at FBD Semple Stadium this afternoon.

Clare kept their side of the bargain with their comprehensive 3-31 to 2-22 demolition of Waterford in Ennis, but once their early flourish dissipated and Cork took control, Tipperary never looked capable of springing the surprise that would have opened an unlikely route out of the province.

Cork were eight points ahead at half-time and the tide had turned so decisively by that stage that a Tipperary comeback was never on the cards. In reality, the second half wasn't very different to a challenge game, as Tipperary bowed out of the championship with a depressing record that read played four, lost four, as they finished bottom of the pile.

It was their second heaviest championship defeat by Cork, the heaviest defeat having been recorded way back in 1942.

If Kerry beat Antrim in the final and win the Joe McDonagh Cup, Tipp will face a playoff with the team from The Kingdom to ensure their participation in next year's MacCarthy Cup.

At no stage in the second half did Tipperary offer any evidence that they could threaten Cork's superiority, as the horror show that began midway through the opening half showed no sign of abating. Midway through the first half they already appeared to be carrying passengers and that scenario didn't change too much on the turnover.

On a day when they felt the full force of Murphy's Law, Cathal Barrett limped out of the action with a leg injury in the 40th minute, and then on the hour mark half-time substitute Alan Flynn departed on a red card following an altercation with Conor Lehane.

The difference between the teams on the scoreboard never dipped below seven points, as Tipp failed to make inroads into Cork's substantial lead in the second period.

Cork had their third goal in the 63rd minute when Tim O'Mahony finished off Darragh Fitzgibon's pass with a deft finish. Goalie Barry Hogan saved his team from an even bigger drubbing when he blocked another O'Mahony effort shortly afterwards.

Tipp had had the ball in the net at the start of the second half after Patrick Collins had stopped Jason Forde's drive, but referee Sean Stack brought the play back for a free, which Noel McGrath converted. A Tipp goal would have reduced the deficit to six points, but it's unlikely it would have changed the trajectory of the game.

And yet, for all that, it looked encouraging for Tipp when the game was in its infancy.

There may have been a five-minute delay to the scheduled starting time but Tipperary quickly got to the pace of the game when it did get underway. Inside the first minute, Mark Kehoe collected Ronan Maher's long, raking clearance before turning smartly and laying off a pass to Jake Morris, who advanced before batting the ball one-handed to the net.

When Noel McGrath followed up with two converted frees, with a Jason Forde point from play sandwiched in between, Tipp were six ahead after five minutes (1-3 to no score).

They might have been outnumbered by their Cork counterparts in the attendance of 27,131 but the supporters of the home team soon raised that rallying chant of "Tipp Tipp", as they dared to dream of an unlikely win in the hope that their side may have saved the best wine until last.

With Ronan Maher, Jake Morris, Mark Kehoe and Noel McGrath involved in so much that was good about that fast start, the supporters had reasonable grounds for optimism.

Cork found their feet with a converted Patrick Horgan free and two fine efforts from Conor Lehane, who would go on to fire six first half points from play. After a Tipp point from Conor Stakelum, who had also started brightly, they had a golden opportunity to extend their advantage to seven points in the 11th minute when they were awarded a penalty, after Mark Kehoe had been fouled by Robert Downey.

However, Noel McGrath's penalty struck the post and was cleared. If that wasn't bad enough, Cork quickly broke and before the home side had a chance to compose themselves Alan Connolly fired home Cork's opening goal. Between the missed penalty and Cork's opening green flag, it proved the pivotal moment of the game, and one that altered the entire mood music of the tie.

Conor Lehane levelled the scores in the 13th minute when he found himself in acres of space, before Robbie O'Flynn put The Rebels ahead for the first time in the 14th minute.

Tipp's prospects took a further nosedive after a quarter of an hour, when Darragh Fitzgibbon gathered a loose ball and ran unchallenged before driving home their second goal.

Cork were now exploiting gaps in the Tipp defence and finding space all over the pitch against a side that was off the pace. Tipp's response to falling behind was poor, as the spirit quickly drained from their challenge.

Cathal Barrett's intended pass to Craig Morgan that trickled over the sideline reflected the extent to which Tipp had lost their way after that encouraging opening. As the first half progressed, Tipp went 10 minutes without a score, from Noel McGrath's 22nd minute free until Jason Forde found the target three minutes before half-time.

In between those scores, Cork had seven points to tighten their grip on proceedings. Holding a 2-14 1-9 lead at the break, they looked comfortable at that stage, with their passage to the last eight of the All-Ireland championship already looking safely secured, and with Tipp destined to tumble headlong out of the championship.