Enda McEvoy: Cork must first fight the battle, then win the match 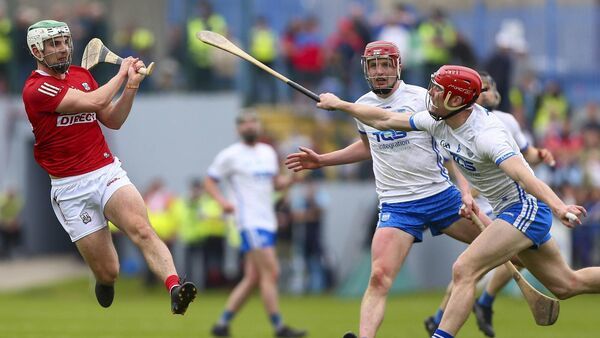 That whispering noise you may have caught during the week? It was the sound of the communal sigh of relief in graveyards from Midleton to Moycarkey.

If Thurles tomorrow amounts to an instance of the former heavyweight champions of the world slugging it out for the provincial light-middleweight title, it is at any rate not some class of ghastly zombified deathmatch to avoid the wooden spoon. One or other of the pair may finish third. In that event they won’t be turning their noses up at large mercies.

Events in Walsh Park last Sunday rendered Tipp/Cork a going concern. At long last Kieran Kingston’s men put meat on the plate. What will please them even more is that they did so against all kinds of metaphorical winds.

It wasn’t a shootout but they won. It was a game played on their opponents’ terms but they won. There wasn’t enough ball going into the visitors’ full-forward line in the first half but they won. The tight surroundings - Walsh Park may be bigger than it looks, as we’ve been constantly informed of late, but like O’Moore Park it plays small – weren’t their bag but still they won.

The outcome posed an interesting and possibly unanswerable question for the observer, whether within the press box or without. In reviewing the causes of victory and defeat after a match, where do we draw the line between the simple and the simplistic?

To declaim of any encounter that the winners “wanted it more” is patently the most reductive reaction imaginable, the equivalent of some oul’ lad bemoaning the demise of overhead hurling or urging players to pull first time or complaining about the price of the pint. All things being equal, which they usually are, hunger shouldn’t enter the equation, which it usually doesn’t.

Did Cork want it any more six days ago than Waterford did? Hardly. Had they wanted it any less a fortnight previously than Clare had? Hardly.

On your proverbial given day, in the event of little or nothing separating the pair, Team A beats Team B because they have a slight and therefore decisive edge in focus or freshness or cohesiveness or possibly even freetaking (of which more anon). In other words, Team A are better coached or better organised or better S & C’d or on better terms with the strategy they’re seeking to promulgate or some or all of these. Sounds like Clare against Cork all over, doesn’t it?

If there was a moment emblematic of Leeside ineffectiveness in their opening two games it came in the first half at Semple Stadium. Ryan Taylor was crouching to rise the sliotar parallel to the sideline under the New Stand, broadside on and wide open. One of the Limerick lads – any of the Limerick lads – would have hooshed him, happily and dispassionately, out over the whitewash and halfway up into the Árd Comhairle seats.

The nearest Cork man, who happened to be Mark Coleman but on the day could have been any of the others, didn’t lay even the ghost of a shoulder on him. Taylor took ball to hand without being touched and skipped away to put Clare attacking again.

Maybe native pride, race memory and general irritation was the spur last Sunday. Maybe sending out a team to empty themselves on the field is an inexact science rather than the baseline requirement you’d imagine it to be. Whatever the case, Kingston finally found an XV to put in a shift and engage physically with the enemy. Cork got bodies back when they defended and committed bodies forward when they attacked. Perfect.

If Brian Cody and John Kiely have taught us anything it is that an intercounty team must exist on a permanent war footing. The trick for Cork tomorrow is to remember the sequencing that saw them through in Walsh Park. First fight the battle, then win the match.

Colm Bonnar may be a placeholder manager but it is to his credit, and to theirs, that his players are still playing for him. Both he and the younger ones appear to be learning on the job; certainly Tipp guarded space in their own half of the field with much more rigour and determination against Limerick than they had against Clare.

Not only are the former high kings of the point from out the field averaging 15 wides a game and not only, according to Barry Cleary’s figures, are they scoring less than they should be from the opportunities they’re creating, they’re a bad 11th of 11 in the 2022 championship when it comes to scoring economy. (Top in the conversion stakes to date are Galway and, oddly, Limerick, both of whom are outperforming their Expected Scores tally.) Look, of course we saw it coming. Two Mahers retired, both of them good for the occasional intercontinental missile. Seamus Callanan absent. Jason Forde and John McGrath unavailable against Limerick. No John O’Dwyer. They’re no longer blowing bubbles or nailing the ones from 60 metres.

Of all the pearls in hurling, none is more valuable than a sniper who can align his sights, allow for the wind and laser the ball over the bar from distance. No obligation to put leather on ash for a solo run and scatter opponents out of the way; just a Shakirasque swing of the hips, which never lie, to fashion swing room and over she goes. It is the most difficult skill imaginable and day after day over the past decade Noel McGrath et al made it look not so much simple as inevitable.

One suspects Tipp folk are past the mourning phase and have moved on to accepting the new reality. One also suspects that Bonnar’s troops could again play well tomorrow and again fail to win.

Here’s a statement that cannot possibly be argued with. Any year Waterford win silverware is by definition a good year.

Here’s a statement that can be argued with but scarcely to any undue length. Regardless of what transpires in Ennis tomorrow, maybe – probably – Waterford weren’t going to beat Limerick in 2022. Looking at it that way, would another defeat to the MacCarthy Cup holders in an All-Ireland final or semi-final have materially improved their season?

We’re getting ahead of ourselves, clearly. The question will only be answerable in two or three years’ time.

Yet if anyone out there can advance a credible explanation as to what befell the Déise last Sunday, and especially how a three-week break that should have refreshed them did nothing of the sort, we’re all ears.

The obvious hypothesis may be the correct one. They’d been going like the clappers since the beginning of the league and finally hit a flat spot. Hence, in their manager’s words, they were bullied and outworked.

Waterford were only a goal behind with 14 minutes remaining, upon which Austin Gleeson drove a wide and Stephen Bennett, hitherto a Swiss timepiece for reliability this season, failed with frees from opposite sides of the field, three consecutive misses that strangled all momentum.

Does it really have to be said that the frees had to go over? At this level they always do. Every day. Particularly the bad days. Top-class freetakers serve as lifebuoys for teams.

After three storming displays on the bounce, and a prospective path that they won’t dare think about opening up with an All Ireland semi-final at the far end of it, Clare are entitled to allow themselves a measure of leeway tomorrow. On Sunday they clocked up more points than Limerick and confined them to 1-9 from play. Even with the caveat of the latter’s finishing forward line (no Hegarty, Lynch, Flanagan or Gillane) those are grounds for both satisfaction and optimism.

And so Waterford’s season may conclude with a victory in Ennis that avails them naught. “I didn’t think it would end this way,” as one of the hobbits confided to Gandalf.

A month ago not many people did. Ridin’ high in April, shot down in May. That’s life.

What with all the draws and late drama the Leinster round robin has been rather more diverting than might have been anticipated. The table as it stands neither lies nor tells us anything we hadn’t already known or imagined.

Here is a three-tier society, with Galway and Kilkenny at the top, Dublin and Wexford in the middle and Laois and Westmeath fighting it out to avoid relegation. The latter duo meet with Westmeath possessed of a cushion in the shape of their draw with Wexford.

Tonight’s schedule thus lacks the frisson it would have enjoyed had Dublin given a half-decent account of themselves against Kilkenny and had Wexford won well in Cusack Park – where, hitting their 20th and 21st wides following Westmeath’s second goal, they should at least have won.

Darragh Egan has been unfortunate in that he, like Páraic Fanning in Waterford, got lumped with what might be called the anti-John the Baptist role. They came after, not before, the other guy.

Fanning was obliged to try and rewire Derek McGrath’s car from scratch, a job that was never going to be completed quickly. Egan, having inherited his vehicle from the previous owner, a Mr Fitzgerald, needs two more years to refurbish it to his personal specifications. He could also do with sourcing an elite freetaker along the way, even if yer man never scores a point from play. Wexford’s recent woes from frees and penalties have bordered on the farcical.

Beyond dismal against Kilkenny, above all in respect of their lumpen first touch up front and inability to make the sliotar stick in the full-forward line, it is possible that Dublin will produce a performance of atonement in Salthill without winning. The Galway manager will not field a second-string selection and the candidates he does send out have places to play for in Croke Park a fortnight hence.

It is equally possible, or more so, that Wexford will rise it for Nowlan Park. And that this still won’t suffice.