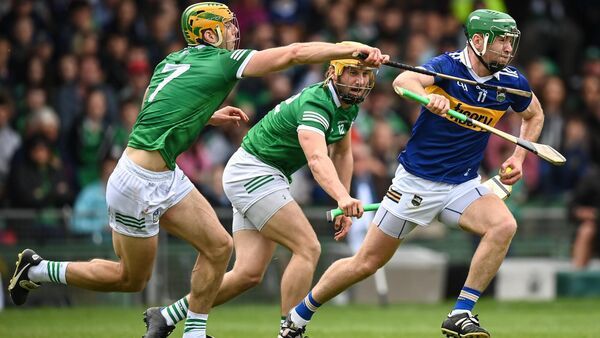 After the defeat by Limerick, Noel McGrath spoke of never being prouder to be part of a Tipperary set-up

An interview with a player on the losing side is a rarity these days but Noel McGrath obliged last Sunday week.

Receiving the Fiserv man of the match award for his performance against Limerick, McGrath gave a stirring defence on Tipp FM of his Tipperary team and insisted all was not lost.

Including last July’s Munster final loss to Limerick and the All-Ireland quarter-final disappointment against Waterford, the latest reverse to Limerick meant this was the first time Tipperary have suffered five straight championship defeats. The county had a worse winless period stretching from 1974 to ‘83. Ten months hardly compares with 10 seasons and yet this group have entered the history books for the wrong reasons.

Thirteen days ago, they at least made it a battle against the All-Ireland champions and a passionate McGrath spoke of never being prouder to be part of a Tipperary set-up. He called on the county to back them. He declared the players had shown an honesty they had not being given credit for and assured they would put their “heart and soul” into the final round game against Cork.

At that stage, Tipperary’s championship future hung by a fingernail. It remains a weak grip but it is stronger and McGrath was convincing: “There was probably character questioned of the Tipperary group between management and players over the last couple of weeks, that would probably hurt because there are lads there that are honest as I have ever come across in a Tipperary jersey and I back them fellas every day of the week from 1 to 33 on this panel.”

Never, not even when after he returned from receiving testicular cancer treatment in 2015, did McGrath give such a powerful oration. His Loughmore-Castleiney clubmate and Tipperary’s 2001 All-Ireland winning centre-back David Kennedy heard his words. “That’s Noel’s character down to a tee. He competes 100% in every game regardless of what it’s for and he takes a lot of pride in the teams he plays for whether it’s club or county. I’ve never seen Noel going out with a lackadaisical attitude and that’s not just me saying it because I know him.

“If you look at how he played the last day, his free-taking was exemplary, he was on the ball so often in open play and it was always positive. When Noel McGrath has possession, Tipperary have possession because nine times out of 10 he does the right thing with it.”

Having had a well-earned break between club and county commitments, McGrath is playing his best hurling in the blue and gold since 2019. Married to Aisling at the end of last December, the Munster semi-final defeat to Ballygunner two weeks earlier ended a remarkable run of 19 consecutive weekends of action for McGrath and Loughmore-Castleiney.

McGrath didn’t return to Tipperary colours until he came off the bench in the league defeat to Dublin on February 24, whereas in 2020 he and brother John were back in Munster SHC championship action five weeks after losing senior finals to Kiladangan and Clonmel Commercials one week after another. At that stage, they were close to spent.

“In that championship, I think we played 16, 17 weeks in a row,” recalls Kennedy. “The emotional drain of coming off two final defeats coming into a county set-up when you’re expected to hit the ground running would have been heavy on them. I just don’t think it was realistic.

“Despite that, in 2020 when Tipp bowed out of the championship to Galway down in the Gaelic Grounds, I think Noel scored four points from play. It was very visible that he was burnt out at that stage. But he looks an awful lot fresher this year. While he doesn’t do all this high octane, taking-on-a-man running, that’s not his game. He uses the head, he looks for space when he has the ball and from there he is able to pass or strike. We’re seeing the true Noel now again.”

Kennedy knows Cork will come to Thurles with a pep in their step but can imagine how Tipperary will be cajoled by McGrath, a three-time All-Ireland winner and All-Star, appointed vice-captain on three occasions but surprisingly never made captain.

“He’s such an experienced campaigner. You’re going back to 2009. Thirteen years as a starter. Seven All-Ireland senior finals. How many Munster finals (seven) and league finals (five)? Noel understands as an established player he leads and people will look to him for guidance but he won’t be shouting and roaring. When he says something, it’ll be to the point and what he says he can back up with a performance.”