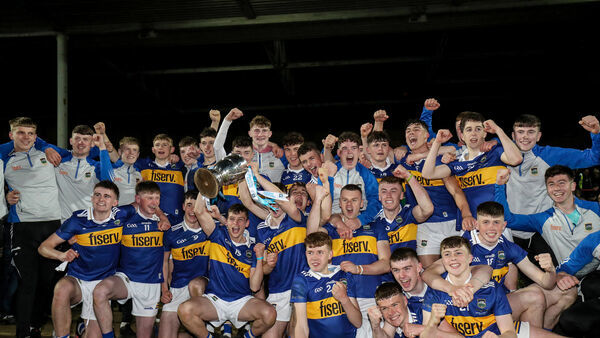 A historic, dramatic, and controversial penalty shootout went the way of Tipperary in this never-ending Munster MHC final.

A historic, dramatic, and controversial penalty shootout went the way of Tipperary in this never-ending Munster MHC final.

Tipperary’s success in nailing their first three strikes and Clare’s failure with their opening three meant only six of the 10 penalty-takers had been called forth when the outcome was settled.

The standout penalty was Tipperary’s first, Premier goalkeeper Eoin Horgan getting a second bite of the cherry after his Banner counterpart Mark Sheedy was adjudged to have come off his line when saving Horgan’s initial shot.

Horgan made no mistake second time around, his teammates Paddy McCormack and Adam Daly also finding the net with their attempts to ensure Tipperary came out on the right side of the first ever provincial final to be decided in this manner.

For Clare, Oisin Whelan and Cian Neylon both saw their penalty efforts stopped by Horgan, with James Hegarty arrowing his shot wide.

Man of the match McCormack was responsible for penalties, the Tipp corner-forward holding his nerve amid a chorus of Clare howls to send an 81st minute free from the Mackey Stand sideline straight between the posts.

McCormack’s accuracy under intense pressure was a long way removed from Tipperary wastefulness across extra-time, during which they clocked seven wides.

Level at the short turnaround, two Oisin Whelan dead-ball efforts nudged Clare two in front. The game’s last two points, though, would come at the other end of the Gaelic Grounds to tie proceedings for the 11th time.

Extra-time had been sent for after Clare sub Dylan Keane Hayes threw over the equalising score — and rescuing score from Clare’s perspective — in the fifth minute of second-half stoppage time.

Keane Hayes’ levelling point arriving 50 seconds after the allotted four minutes of injury-time had passed and Tipperary’s contention on the sideline that Jamie Ormond’s strike in the preceding play was incorrectly waved wide combined for a rousing finish that had the crowd of 4,371 on their feet.

Where it was a Clare replacement who had the last say here, for the quarter of an hour before that, it was Tipperary’s bench who bent this final to their will. And how timely a bench impact it was for when the Premier lost captain Sam O’Farrell to a second yellow card on 47 minutes, followed immediately by a Jack O’Neill point to complete a Clare five-in-a-row and move the Banner 0-16 to 0-13 clear, Tipperary looked in an ocean of trouble.

Sam Rowan was the goalscerer, with fellow replacements Darragh McCarthy and Cathal English chipping in with points.

They twice more led by two during a tense and edge-of-the-seat finish, but a Whelan free half a second before the end of the allotted four minutes and Keane Hayes’ aforementioned equaliser, to leave the scoreline reading 1-18 to 0-21, dragged this contest further into the night.

It was Tipperary who led by the minimum at the end of a hesitant first half that never developed any real fluency.

Given the age-profile of the players on show, it was hardly surprising that the first period was influenced to a substantial extent by nerves as players on both sides were prone to wayward and aimless stick-passing.

Clare’s approach of withdrawing their half-forward line to create an abundance of space in front of their inside line did not work as they might have intended it to, their crowding of the midfield area playing more in Tipperary’s favour than theirs. Moreover, Clare’s inside line got next to no change from the Premier defence.

For all that, mind, it was the young Bannermen who led 0-3 to 0-1 after six minutes as Michael Collins, Neylon, and Whelan sent over early points.

Brian O’Connell’s charges, though, would not score again for another 11 minutes, during which time Tipperary reeled off five-in-a-row through O’Farrell, Damien Corbett (two frees), Jack O’Callaghan, and Joe Egan.

Tipperary could well have added a goal during this scoring sequence, Clare ‘keeper Mark Sheedy producing a double save to deny Conor Martin and Egan.

This 41st Munster minor crown advances Tipperary to the All-Ireland semi-final, with Clare headed for the quarter-final round-robin along with Galway and the losers of this week’s Leinster final.