Brian Gavin: I definitely would have sent off Aaron Gillane 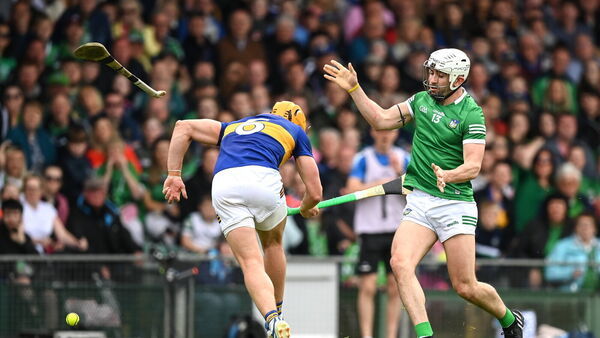 What a savage atmosphere that was in Limerick yesterday and Tipperary deserve acknowledgement for matching the All-Ireland champions’ intensity for so much of the game.

A tough, physical game, it appeared to be just as difficult to referee. Liam Gordon refereed these two in a Munster semi-final two years ago and at the time I felt it was too much for him. It wasn’t a criticism of him rather Croke Park for prematurely appointing him to such a big game.

Here, for the most part he looked to be up to the job. His signalling and fitness were sharp and he gave a lot of good advantage that added to the flow of the game. The vast majority of the yellow cards he handed out were right too and he whistled for a couple of throw balls.

The big question is whether he should have sent off Aaron Gillane in the final quarter. I definitely would have. I understand that people believe it to be a 50-50 decision but the main problem I have with his foul was that he was pulling in the direction away from the Tipperary goal initially with two hands on the hurl. He went in with intent.

It might not have been the most ferocious strike on Ronan Maher and I think Liam may have stopped short of showing red because Gillane seemed to ease up on the blow but there was more than enough done for me to send him to the line.

If he had gone in with one hand to flick the ball away, then it might not have even been a yellow but it looked worse with two hands and could you really compare it as a yellow to the ones that were shown to Gearóid Hegarty, Conor Stakelum and Noel McGrath? Hardly.

After being fortunate not to be red-carded against Tipperary in last year’s Munster final, Gillane is using up a lot of luck right now. Darragh O’Donovan may also have been spared when he was booked for using the hurl on Jake Morris. Maybe it was O’Donovan getting one back after he shipped a heavy foul a few minutes earlier but linesman Seán Stack seemed to think there was something in it and told Liam.

With Limerick continually playing to the edge, I would really hate to referee their in-house games. John Kiely recently said he takes the whistle for them but I’d say he uses it as rarely as Brian Cody when Kilkenny were hitting the heights.

Liam, with his team, made some good spots such as Craig Morgan’s foul on Graeme Mulcahy. He paid no heed to the crowd when he penalised Gillane for catching the ball three times. Kyle Hayes was rightly yellow carded for persistent fouling although Tom Morrissey was unlucky to be done for overcarrying early on when his hurl was being held.

On Saturday, Brendan Cawley contributed to the game by allowing a good bit of physical play in the opening stages. Some of Cork’s tackling was inspiring but at times they were over-zealous, especially on Paudie Clifford. John O’Rourke was correctly booked as was David Clifford who knew exactly what he was doing in fouling Seán Powter.

The two major talking points in the Cavan-Donegal Ulster semi-final yesterday were the first-minute penalty call and the decision to show a yellow card to Pádraig Faulkner on Paddy McBrearty. I felt Conor Lane was within his rights not to award the spot kick as not enough pressure was applied. Faulkner’s high tackle did catch McBrearty in the jaw but I didn’t see the maliciousness in it to warrant a red.

Finally, something to mention that we might see more of in the coming weeks. Physios and medics appear to be double-jobbing in some cases, bringing in messages to players now that the maor foirne role has been disbanded. We all want quieter sidelines but I’d have sympathy for management teams, 35 minutes a half is a long time not to be able to communicate and a well-policed running selector role should be introduced.