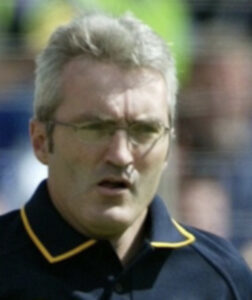 Following a meeting of our Management Committee, which was held this evening, Tipperary GAA are delighted to announce that Colm Bonnar has been appointed as senior hurling manager for a 3 year term. Colm Bonnar is bringing extensive previous experience to his new challenge of being manager for the Tipperary Senior hurling team. Apart from his 17 years playing with Tipperary teams between 1982 and 2000, where he played in 17 Munster Finals (winning 11) and 10 All-Ireland finals (winning 5), Colm’s management career has also seen him build up a catalogue of experience and success across many teams.

Following retirement from playing with Tipperary, Colm first cut his teeth at intercounty coaching where, with Michael Cleary and Sean Hennessy he coached the Tipperary camogie team to their senior All Ireland win of 1999. He then joined Gerald McCarthy (later Justin McCarthy) with Waterford senior hurlers as coach/physical trainer when they won their first Munster title in 2002 after a 39 year gap.

Colm then moved back to his native county as Physical trainer/selector of the Tipperary senior team with Ken Hogan from 2004-2005, unfortunately with little success in this period. Colm progressed on from this however to manage the Wexford senior hurling team from 2008 to 2011 where they won the div 2 league final, beating Clare in the final.

Colm got a great insight into Kilkenny hurling and further success when he co-managed with Andy Moloney and coached Ballyhale to a club All Ireland title in 2015. Then, in a 3 year period from 2017 to 2020, Colm was the manager of the Carlow senior hurlers where in successive years, he brought them from Div 2, to Div 1B and up to Division 1 hurling. In this time Carlow had their most successful period in hurling winning the Christy Ring, Joe McDonagh and they played in the Leinster Senior hurling round robin championship.

Throughout all of this time Colm Bonnar has been ever associated with the Waterford Institute of Technology (WIT) and the Fitzgibbon Cup where he has managed WIT to 6 Fitzgibbon cup championship wins and numerous Fresher All Ireland hurling wins. He also managed WIT to their first Purcell Cup and Ashbourne cup (camogie) wins.

Colm says that he ‘relishes the opportunity to take on his biggest, but proudest challenge as Tipperary Hurling Manager. I realise that one of the most successful Tipperary teams ever is obviously coming to a natural transition with the departure of Liam Sheedy and the recent retirement of Brendan Maher and I would like to congratulate them on their amazing careers for Tipperary. However, I am confident with the experience still in the current squad and the many successful u20/21 and minor teams over the last number of years, there are many talented hurlers in Tipperary bursting to take their opportunity to be successful at senior level, just like I am as the new manager.’

‘I will bring to this role, all my playing and managerial experience, my passion for the game and for Tipperary, along with a track record of success and getting the most out of teams and players.’

Colm has also studied extensively to build on his experience and holds Honours degree in Sports Management, a Master in Management in Education, a Setanta College Diploma in Personal Training and Strength & Conditioning and a Diploma in Sports Psychology. Colm is currently working in the Student Life and Learning Department in WIT.

The management committee have also appointed Brendan Cummins as Manager of the under 20 hurling team, he will be joined by former Kerry senior hurling manager Fintan O’Connor as coach. The under 20 management have also been appointed for a 3 year term.

Tipperary GAA wish both team managements the very best of luck and look forward with enthusiasm to the coming year’s.

WESTSIDEThe inter-county hurling season may be over but...

No regrets as Sheedy departs as Tipp manager - Nenagh Gua...