'There was a championship feel there': League finale the perfect preparation for Waterford 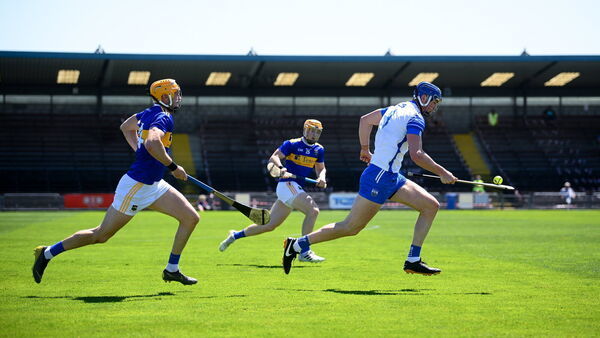 The fine old tradition of out-of-town tryouts for musicals before they hit Broadway got a revival of sorts in sunny Walsh Park, as Waterford and Tipperary tried to fine-tune their teams in a dress rehearsal for the championship, now just a fortnight away for the former side.

Perhaps that’s why Waterford won, and with something to spare. The time for fine-tuning is extremely finite in their case, and the way they overran Tipperary in the second half suggested a team seeking to peak very soon indeed.

“Waterford are a well-drilled team, they’re a capable team, and they have pace,” was Tipp manager Liam Sheedy’s view.

“They come at you and they run, and with breaking ball around the half-back line - every time it broke there was a Waterford man picking it up, and as soon as he picked it up there were bodies coming off the shoulder.

“We were keeping the scoreboard up around the 20-mark until today, and we really got exposed today. When you lose the game in the middle third you’re not going to have any other outcome.

“The forwards today — if they get a 60-40, 70-30 ball, then that’s trouble. They (Waterford) were able to find loads of space down there — we were outplayed in the middle third for most of the match, they built a platform and to be honest, they could have had another goal or two.

“We were playing with fire a few times and Paudie (Maher) put the body in the way a few times.”

Tipperary’s response was a typically deft Noel McGrath goal late on, and a Forde free before half-time left them one in front, 2-13 to 2-12.

Waterford dominated the third quarter, outscoring their opponents 0-8 to 0-3 to lead 2-20 to 2-16 by the second water-break. As Sheedy put it, their pace and support play had Tipperary on the back foot until, in the 57th minute, Seamus Callanan looked alive to first-time a goal: 3-18 to 2-23, but Waterford wouldn’t be denied.

Stephen Bennett was irresistible — he ended with 0-15 — and while Tipperary could have made it interesting with a late goal, Ronan Maher’s wickedly struck free was turned aside.

Waterford boss Liam Cahill was concerned about the potential toll taken in injuries to Austin Gleeson, Conor Prunty, and Shane Fives, but otherwise he was happy enough.

“A great workout ahead of championship. There was a championship feel there for most of the game,” he said.

“The attitude is always good with these players. They are good, honest players. We had a lot of questions asked in Salthill last week, had to address them during the week. Our shape was that bit better. I’ve always said we’re a work in progress.

“It gets real in two weeks’ time. That’s the reality. I hope we’ve enough done to put our hand up and progress in the championship.”

Cahill had plenty of positives to take from the encounter. Both sides freed men to augment the middle of the field yesterday, for instance. For Waterford Peter Hogan dropped back to hoover up loose ball and link the play, while Michael Breen offered a more direct option for Tipperary, snapping an early point and carrying the ball.

Tipp have plenty of form when it comes to deploying a floating playmaker around this sector — Noel McGrath must have been born between the two 65m lines — but Waterford benefited far more from the energy and industry they showed in that sector.

Even allowing for managers in this truncated league wanting to get game time into players, Tipperary’s substitutions in the middle third were clearly being made to try to stifle opponents who wouldn’t be denied.

It wasn’t all bad news for the Premier. Both their draw with Cork and defeat of Galway was marred by some wayward shooting, and wayward shot selection

Tipp had fewer bad wides and Seamus Callanan’s late goal chance might have been converted if the full-forward was less rusty, but that sharpness will come.

Waterford now have a bit more in common with Clare than they’d like, however. David McInerney limped off gingerly on Saturday evening against Kilkenny, and Austin Gleeson did a fair imitation in Walsh Park. Conor Prunty and Shane Fives are other worries for Liam Cahill, but Gleeson’s ability to influence a game was on show on his home pitch.

Largely anonymous for much of the first half, two of his interventions led directly to Waterford’s goals from Dessie Hutchinson. Cahill will be hoping the news will be good, because he left his listeners after the game in no doubt about his focus.

“Everything is geared towards championship.

“For every manager, that’s their vision. Championship is the real judge. The likes of the performance today won’t really matter if we’re turned over in two weeks’ time.

“We really have to be ready for Clare. See the momentum they’re building? If we’re beaten by Clare in two weeks’ time we can have no excuses. We’re well forewarned as to what’s coming.”

The curtain goes up soon enough