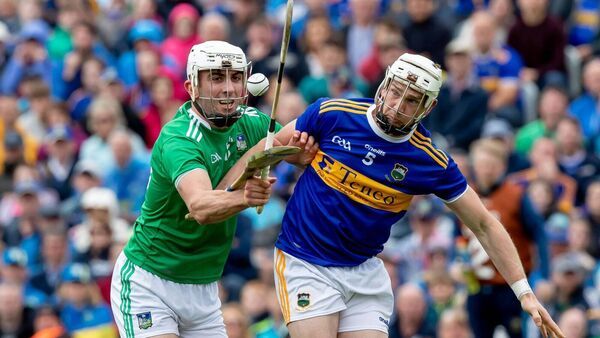 'Just as a team irons out its mistakes and learns what’s allowed and what isn’t, referees will get to use their own discretion to use the rules in the right way'

Tipperary’s Brendan Maher is “confident” that any teething problems with the new playing rules in hurling will be ironed out soon.

Speaking at the RTÉ Sport Summer of Sport launch, Maher said he hoped any issue with rules “would iron itself out over the next few weeks.

“Just as a team irons out its mistakes and learns what’s allowed and what isn’t, referees will get to use their own discretion to use the rules in the right way — I think that will happen, I’d be confident it will.

“I just hope they don’t overthink it and put too many rules and regulations in place. We want the game to be as competitive as possible but it’s a highly physical sport and the last thing we want is players going out to play afraid to do something because it could be interpreted as dangerous

Maher said he was mindful of the new rules when playing but added: “It’s probably more about training and not putting yourself in situations where a physical challenge might be deemed unsafe. It’s such a high-paced physical game that these things are going to happen but overall we need to keep the healthiness of the game and not lose what we’ve gotten in terms of the exciting, really intense matches. We need to make sure we don’t lose that.”

With over a decade of service in the blue and gold of Tipperary, Maher has learned to deal with criticism and opinions over the years.

“I think I became more accepting of it, I think I got a little more upset about what was said, and people having an opinion — and you might be talked about yourself so you end up thinking ‘why are people saying that about me’.

“Over the years though you just learn to accept that as part of the game.

“What’s happened over the last 15 months has put things in perspective — that this is a game and when things go right it’s great, but when things go wrong it’s not the end of the world.”

Maher has enjoyed the short run-in to competitive games this year.

“More games is what players want, getting that training to match ratio to be as tight as possible, because players want games. It’s been great so far, I’ve really enjoyed it.

“Now you’re making mistakes, and people are seeing things on television that might have happened in previous years during the pre-season, you’re making those mistakes in front of everyone — but it’s great.”

Maher acknowledged that Limerick are setting the pace for other teams.

“They have certainly set the bar higher. Different teams come along and do that — at the start of my career Kilkenny did that, and we were trying to match them in intensity.

“Limerick have done that over the last few years, bringing a different element to the game that we’ve had to try and overcome.

“Different teams try different ways to play, but ultimately it’s about trying to get the best out of what you have, and your group.

“All teams would be about focusing on themselves — Limerick aren’t thinking about other teams, they’re just getting the best out of themselves.”

Does that force other teams to evolve in order to beat them?

“I think so, but you do that in every aspect of the game anyway, to find new aspects of the game — to find new ways to approach training, whether it’s gym work and introducing new sports science, or on the field where you’re looking at new ways to attack, different positional changes that might affect the way you play.