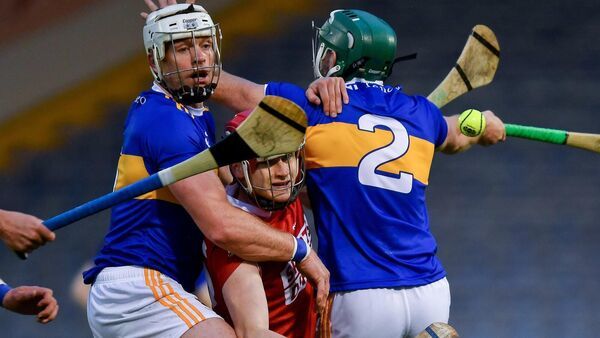 Published: over 1 year ago

Nothing like an old Munster derby to help liven up a damp May evening in Semple Stadium, even if this one proved more a slow trickle and then late rush of scores that in the end simply couldn’t decide on a winner.

Both teams had their chance to claim it at the death, Patrick Horgan’s last shot at goal coming off the upright, shortly after Padraic Maher had sent his search for a late, late winner just wide. It was certainly wasn’t for want of late effort.

Both teams will take the end result though, even if it leaves Tipp still seeking a first win of the new season, after drawing last week with All-Ireland champions Limerick. Cork remain unbeaten.

Played between bright evening sunshine and dark wintry showers, at times more tactical than openly flowing, that late rush of scores was climaxed by a magnificent long-range free from Jason Forde, which after some considerable effort brought the home team level again: he finished with 0-10.

Indeed one of Forde’s prior frees, on 67 minutes, was waved wide when the player and Tipp manager Liam Sheedy was sure it went over. Still Tipp’s persistence got its just reward after they clawed back the late succession of points from the likes of Cork replacements Daire Connery and Conor Cahalane and Alan Connolly.

They built on the first turning point early in the second half, Horgan charging down on the Tipp goal on 44 minutes, batting his effort him into the net past goalkeeper Barry Hogan. A Horgan free straight after gave them some daylight, just night enough to close out the game with the five minutes of added time certainly favouring Tipp.

After drawing with All-Ireland champions Limerick in round one, Tipperary were expected to hit the soggy ground running, and they did: Alan Cadogan may have opened the scoring after a minutes, before Tipp hit the next three without reply thanks to John “Bubbles” O’Dwyer, Noel McGrath and then his brother John.

Indeed it was only a second start for the trio of McGrath brothers in the same senior game - Brian in defence, Noel and John up front; Tipp also welcomed back Padraic Maher, who played mostly at full back.

Cork travelled up fresh from their five-goal fest over Waterford in round one, and soon picked up where they left off on that front: Jack O’Connor missed a good chance for a goal early on, before on 10 minutes Tim O’Mahony played a sweet one-two with Patrick Horgan, O’Mahony helped himself to the close range finish, despite the attention of a trio of Tipp defenders.

That turned the contest into a closer confrontation, the teams more or less exchanging points up to half-time, drawing level four times in the process, before Tipp stole the first notable slight advantage.

Six first half frees, a second from John McGrath and an impressive long range score from defender Barry Heffernan, helped afford them a two point lead, just before a Horgan free brought it back to the minimum at the break, Tipp’s 0-12 to Cork’s 1-8. Robert O’Flynn had contributed one of Cork’s better scores, before retiring soon after with a hamstring injury.

There was plenty of bite on the field too, Cork also adopting some distinctly short-ball tactics, a reflection perhaps of the new additional coaching input of former All-Ireland winning manager Donal O’Grady